Chuck Norris and the Prophet Jeremiah: Kipp Davis on Jeremiah’s Reputation in the Dead Sea Scrolls 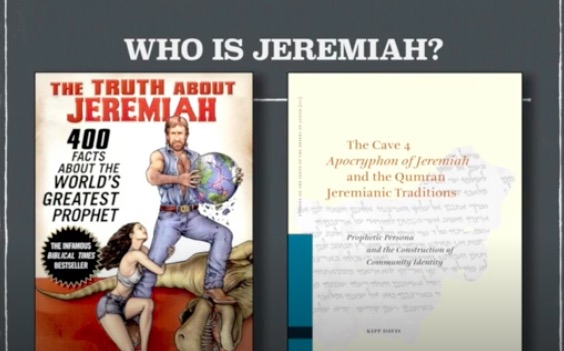 Back in 2016, scholar of the Dead Sea Scrolls Kipp Davis (PhD, University of Manchester) gave a lecture on the prophet Jeremiah that discusses the ancient figure’s reputation in literature other than the canonical book that bears his name, particularly in the DSS. The talk, “Forging Reputations of National Icons: Chuck Norris and the Prophet Jeremiah,” opens with a humorous look at the mythology surrounding Chuck Norris (and other modern figures) and then continues on to an analysis of the figure of Jeremiah in the Damascus Document and a section of songs of praise attributed perhaps to the founder of the Qumran sect. There are interesting parallels with texts from canonical Jeremiah but these texts are using the prophet’s reputation and work in interesting ways, especially given the apocalyptic worldview that the DSS tend to exhibit. As Davis notes, like Chuck Norris, Jeremiah becomes an iconic figure whose reputation and writing serves a new purpose in the consciousness of the community employing it.

The lecture is less than 20 minutes in length so you have no excuse to stop watching whatever pop-apologist or pop-atheist and instead listen to an actual scholar give an interesting talk on one of Judaism’s and Christianity’s most important figures.

← Bibhistctxt: Biblical Hebrew Isn’t Uniform
Bibhistctxt: The “Surprising Twist” in the Dating of the Song of Deborah →

2 Comments on “Chuck Norris and the Prophet Jeremiah: Kipp Davis on Jeremiah’s Reputation in the Dead Sea Scrolls”