Preaching to the Choir: On Pop-Apologists and Their Craft

I’m not a very intelligent individual nor am I an exceptional writer. This blog, my presence on Twitter, and my (slowly) growing YouTube channel represent my rather insignificant contribution to the world of biblical studies (and sometimes atheism). But though my influence is small, it is fundamentally honest. I try to do my homework and write what I actually think is the case on biblical texts and related subjects. I do my best to cite my sources and not misrepresent scholars upon whom I depend as a mere amateur. And when I’m shown to be wrong on the facts, I do my best to acknowledge error and align my views to fit the facts.

Compare my approach with the many pop-apologists out in the world. As is often the case, their lack of epistemic humility leads them to making numerous errors in their writing and speaking. Take SJ Thomason, the Queen of the Quotemine, who once wrote in a blog post,

Joshua fought the battle of Jericho, but critics say the battle never occurred. They state that walls do not fall down because of people marching around them. Yet, as Professor John Garstang, who’s an archaeologist and British authority on Hittite civilization says, “As for the main fact, there remains no doubt the walls fell outward so completely that the attackers would be able to clamber up and over their ruins into the city” (Kennedy 1999, pp. 20).What is unusual is the fact that archaeological evidence demonstrates the walls fell outward, when ordinarily walls fall inward.1

You’ll notice that she quotes John Garstang, a British archaeologist who became famous for his field work that he believed supported biblical narratives found in the Torah and the book of Joshua. She isn’t quoting Garstang directly but is instead quoting James Kennedy in his book Why I Believe. And Kennedy is not quoting Garstang directly as his note shows he is depending on Josh McDowell’s 1979 edition of Evidence That Demands a Verdict.

So not only is this yet another instance of Thomason quotemining, it is mine that runs pretty deep. But there is more. Let’s compare what Thomason wrote in her blog post and what Kennedy wrote in his book over a decade before Thomason wrote.

The only attribution Thomason offers in her piece is at the end of her quoting of Garstang. She offers no citation for her words which have clearly been lifted and altered from Kennedy. This is plagiarism and is frankly inexcusable for anyone, especially for someone like Thomason who not only holds a PhD but teaches students in a university setting.3

But there is another issue. Because Thomason is clearly depending on Kennedy for her information she ends up holding a position that is simply not tenable. I have already discussed the issues in another post so I won’t rehash it here, but it suffices to say that there was no Israelite invasion of Canaan and, even if there was, the city of Jericho was either uninhabited or sparsely populated and was unfortified at the time it purportedly occurred.4

Virtually no modern archaeologist of ancient Israel believes that the city was sacked by Joshua and his armies. As historians Simon Price and Peter Thonemann write with regards to Jericho, “[T]here is simply no easy way of marrying the biblical narrative with the archaeological evidence.”5

Pop-apologists also have a tendency to resort to threats of hellfire when they lack substantive arguments. For example, Del Potter, an apologist who holds a Master of Arts in Apologetics from Southern Evangelical Seminary, recently used this tactic against biblical scholar Steven DiMattei.

In context, DiMattei had been discussing the radical nature of some of Jesus’ teachings, particularly with regards to wealth and possessions.  Potter was unable to present a sound rebuttal to DiMattei and was thus left with threatening DiMattei with hellfire. When I called Potter out on this, this is how he responded.

As Potter explains, “both [DiMattei and I] have been warned.” Furthermore, Potter has “labored with [me] on certain issues and [has] taken time to answer [my] questions.” To this I replied,

Potter didn’t care for this and ended our conversation.

Apparently pointing out the truth is “childish.”

In any event, I have no idea why threatening hell seems to be so compelling to people who paid good money to earn a degree in apologetics. I’m curious as to what professor taught them, “If all else fails, just tell them that if they don’t agree with you that they’ll wind up in hell.” Hell probably doesn’t exist but even if it did is this how God wants people to arrive at belief in him? A “believe me or else” line of argumentation?

Stuck in the Past

Pop-apologists also tend to be stuck in the past with regards to attacking the arguments of modern scholarship. Like creationists who attack Charles Darwin when attempting to refute evolutionary biology, blissfully unaware that in the nearly one hundred and sixty years since he wrote his work on the topic a lot of scientific research bolstering the theory has happened, so too pop-apologists will at times display little knowledge of modern biblical scholarship, no doubt a byproduct of their tendency to read only those authors with whom they already agree.

One example of this can be seen in the interactions of Heather Schuldt, a blogger and student in the graduate level apologetics program at SES. In attacking the Documentary Hypothesis Schuldt doesn’t attack modern formulations of it but instead focuses in on the work of Julius Wellhausen, one of the founders of the hypothesis. A search of “Wellhausen” on Schuldt’s Twitter page reveals her obsession with the moniker. 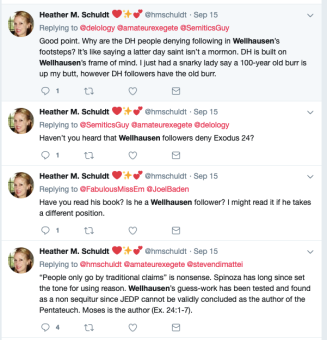 And there are even more references to be found. The obsession reveals that Schuldt has likely never interacted with modern works defending the hypothesis like those by Richard Elliot Friedman or Joel Baden.6 She has probably read another apologist who attacks Wellhausen’s dated argument and then just parrots. Like those creationists who somehow think attacking Darwin erases the scientific research of the last century and a half, so too Schuldt’s attack on Wellhausen and his “followers” reveals a total lack of awareness of the scholarship that has been produced in the last century and a half on the Documentary Hypothesis.

Preaching to the Choir

What this all reveals is that pop-apologists like Thomason, Potter, and Schuldt are only interested in speaking to the already converted. Otherwise they wouldn’t write and interact the way that they do. Can’t be original? Just plagiarize. Can’t convince your interlocutor? Threaten them with hell. Can’t defend against modern scholarship? Attack older scholarship that virtually no one now promotes.

To be fair, I have seen non-believers act in ways similar to the pop-apologists. Their actions are inexcusable. Yet there is a clear difference between their actions and those of the pop-apologists: they aren’t claiming that God is their ground of morality and truth. The pop-apologists hold others to a high standard that they themselves fail to realize. But as their usual move is to either ignore counter arguments or to strawman them, they are left to themselves in their echo chambers. Their followers see no problem with their work because they simply do not know any differently. Like so many, they simply don’t have the tools or requisite knowledge to identify bad arguments. This is no fault of their own, of course, but it does bring greater condemnation to the pop-apologists who are willfully deceiving their followers.

It seems that pop-apologetics is nothing more than preaching to the choir.

1 In an earlier iteration of that blog post Thomason did not include (to my knowledge) the quote from Garstang via Kennedy. Instead she wrote,

Joshua fought the battle of Jericho, but critics say the battle never occurred. They state that walls do not fall down because of people marching around them. What is unusual is the fact that archaeological evidence demonstrates the walls fell outward, when ordinarily walls fall inward.

That is the quote I dealt with on my blog when I wrote a refutation to her last year. It appears that only after I posted my response that she changed her blog post. Here is a screenshot of the current quote in case she changes it again.

I may need to make this my practice for the future.

3 The tragic irony of it all is that Thomason has flouted her academic pedigree as evidence of her knowledge and ability. Here are some examples from Twitter. 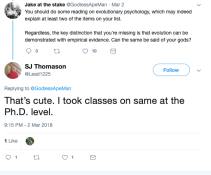 4 For a brief but excellent treatment of the issues written on a popular level, see Eric H. Cline, From Eden To Exile: Unraveling the Mysteries of the Bible (National Geographic, 2007), 93-120.

5 Simon Price and Peter Thonemann, The Birth of Classical Europe: A History from Troy to Augustine (Penguin Books, 2010), 55.

6 See Richard Elliot Friedman’s Who Wrote the Bible? (HarperOne, 1997) and The Bible With Sources Revealed (HarperOne, 2003) as well as Joel Baden’s The Composition of the Pentateuch: Renewing the Documentary Hypothesis (Yale University Press, 2012).

← The Weekly Roundup – 10.26.18
Some Thoughts on Carey Bryant’s “The Gospel of John as an Eyewitness Account” →

10 Comments on “Preaching to the Choir: On Pop-Apologists and Their Craft”