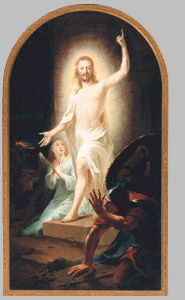 As they entered the tomb, they saw a young man, dressed in a white robe, sitting on the right side; and they were alarmed.
Mark 16:5, NRSV

The ending of Mark’s Gospel is famous for what it doesn’t have, namely appearances of the risen Jesus to his disciples. In fact, the Gospel ends with the words, “So [the women] went out and fled from the tomb, for terror and amazement had seized them; and they said nothing to anyone, for they were afraid” (16:8). That is awfully anticlimactic. It is no wonder that a longer ended was fabricated and tagged onto the end of it, an ending that in some ways reflects the endings of Matthew and Luke. In the other two Synoptics, Jesus does make some post-mortem appearances: in Matthew he first appears to the two Marys as they are on their way to tell the disciples what the angel had told them (Matthew 28:1-10) and then he meets the disciples in Galilee (28:16-20); in Luke he appears to two disciples who are on their way to Emmaus (24:13-35), then to the rest (24:36-49) before being carried off to heaven (24:50-52).

But in Mark there are no appearances to either the women as in Matthew or to the disciples only as in Luke. The first witness to the resurrection is “a young man, dressed in a white robe” (16:5). A young man? In Matthew’s version we read of “the angel of the Lord” (28:2), a character lifted from the pages of the Hebrew Bible. In Luke the women meet “two men in dazzling clothes” which are later identified as angels (Luke 24:4-5, 23). Not in Mark. In Mark it is a young man – a neaniskos. Is he an angel? I used to think that he was but now I’m not so sure.

Mark only refers to a neaniskos one other time in the entire Gospel. In 14:51-52 we read,

A certain young man [neaniskos] was following him [i.e. Jesus], wearing nothing but a linen cloth. They [i.e. the Jews who arrested Jesus] caught hold of him, but he left the linen cloth and ran off naked.

This is an odd detail to include in the story. I’ve heard it suggested that the young man was Mark himself, inserting his own remembrance into the narrative. That is far-fetched for a variety of reasons, not the least of which is that there is absolutely no exegetical warrant for it. But Mark isn’t one to throw in details for absolutely no reason. So what is going on here with this neaniskos?

Notice how he is described. For whatever reason, this neaniskos is following Jesus as he is being led away. He is wearing “nothing but a linen cloth [Greek, sindōn].” When the guards attempt to catch him, the neaniskos runs off naked, leaving the cloth behind. He is just like the rest of the disciples of Jesus who had “deserted him and fled” (14:50). In the rest of the Markan Passion narrative, none of the disciples stand by Jesus. In fact, Peter denies knowing him three times (14:66-72). And as Jesus expires, only his female followers were there (15:40-41) and it is they who wrap him in a sindōn for his burial (15:42-47). The disciples are nowhere to be found.

Following the sabbath, Mary Magdalene, Mary the mother of James, and Salome travel to the tomb wherein Jesus had been buried to anoint him with spices. They were concerned that they would not have access to the body since the entrance to the tomb had been covered by a stone. But when they get to the tomb, they notice the stone has already been rolled away and when they enter it they see a neaniskos. But this neaniskos isn’t naked. Rather, he is “dressed in a white robe.” What is going on?

The robe is a stolē, a flowing garment worn by those of great prestige (see Mark 12:38). But it isn’t just a stolē but a stolēn leukēn, a “white robe.” The only other time someone’s clothing is described as leukos in Mark is at the Transfiguration – “And he was transfigured before them, and his clothes became dazzling white [leuka], such as no one on earth could bleach them” (9:2b-3). These aren’t incidental details. They are part of Mark’s story. That the neaniskos in 16:5 is described as wearing a white robe is clearly intentional.

Mark is contrasting the first neaniskos with the second. The first followed Jesus but fled when the guards attempted to arrest him as they had Jesus; the second is there at the empty tomb to give instructions to the only ones of Jesus’ inner circle who saw him die on the cross. The first fled the scene naked, leaving behind his sindōn; the second is clothed in a stolēn leukēn and greets the ones who had buried Jesus in a sindōn. The first was the last to flee from Jesus; the second was the first to find the empty tomb.

This is a story of restoration woven into the Passion narrative and the subsequent Resurrection account. It is a symbol of the power of Jesus’ resurrection. Jesus is able to take a naked deserter who left behind a symbol of death and clothe him in a robe whose color represents a transfiguration, a glorious change. And therefore, far from being an incidental detail in Mark, the story of the fleeing, naked neaniskos is a Markan symbol of the power of the Easter message. The last one to flee from Jesus is the first witness to his resurrection.

3 thoughts on “Musings on Mark: The First Witness to the Empty Tomb”