Caught in the Act: SJ Thomason Is At It Again 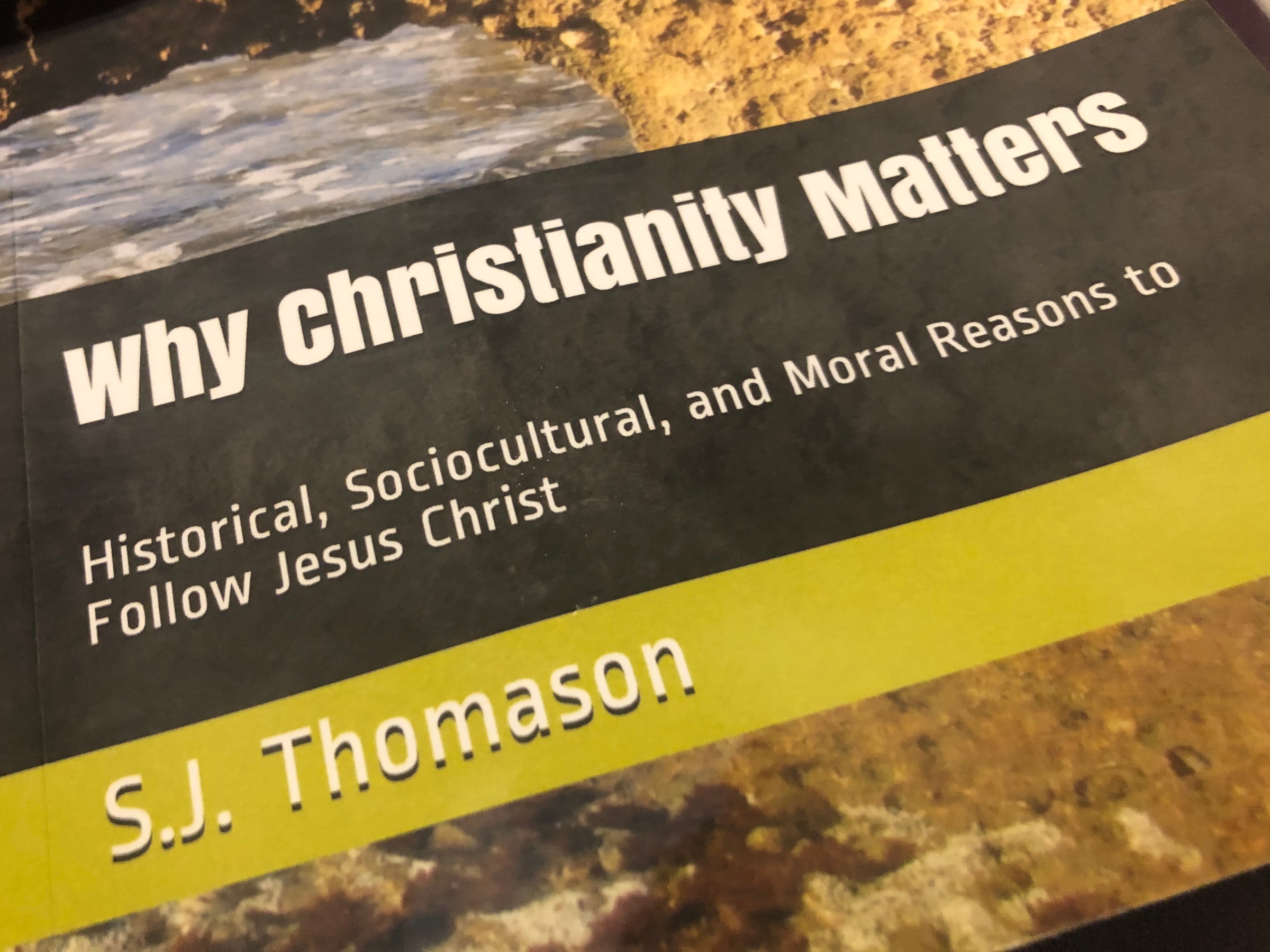 This year pop-apologist SJ Thomason finally published her long-awaited book titled Why Christianity Matters: Historical, Sociocultural, and Moral Reasons to Follow Jesus Christ.[1] It is little more than blogposts she has written in the past warmed over with little to no editing. Expectations, in other words, aren’t very high. The book itself is divided into four main sections: “Belief in a Benevolent Supreme Being” (chs. 1-10), “Evidence for Christianity and Questions Commonly Posed” (chs. 11-32), “Rebuttals to Nonbelievers” (chs. 33-37), and “The Sociopolitical War on Christianity” (chs. 38-42). Most chapters are just a couple of pages though there are a couple that are a dozen or more (e.g. chs. 6-7). The format of these chapters follows her blog posts which include parenthetical citations in what appears to be APA/MLA style as opposed to the use of footnotes or endnotes (my preferred way of citation).

The other day I completed ch. 2, “How Did the Universe Begin?”[2] It is an eisegetical mess, ripping biblical texts from their context to make concordist assertions about them. None of this is original to Thomason as she admits in the chapter. She is beholden to Hugh Ross whose lackluster handling of the Bible is frustrating for those of us who prefer to read those texts in light of their historical context, not ours. But Thomason has no training in biblical exegesis, historical criticism, or related fields, and, from everything I’ve ever read from her, she has read very little on those subjects. She is therefore unarmed before the stature of a seasoned apologist like Hugh Ross. As the old adage goes, “Those who know better do better.” Thomason simply doesn’t know.

Thomason offers three major points that supposedly align the biblical texts with modern scientific understandings of cosmology. The first is that of a “transcendent cosmic beginning that began a finite time ago.” She lists and quotes nine texts in support: Genesis 1:1, Isaiah 45:18, Proverbs 8:22, Titus 1:2, John 1:1, John 17:24, Colossians 1:15-16, 1 Peter 1:20, and 2 Timothy 1:9. The second is that of a “continuous, universal cosmic expansion” for which he cites Job 9:8, Psalm 104:2, Isaiah 42:5, and Zechariah 12:1. Third and final is that of a “cosmic cooling (and progressive decay) from an extremely hot initial state” for which she quotes Romans 8:20 and Revelation 21:1. She then writes this: “In summary, the Bible offers solid support for the creation of the universe, distinguishing it from other religious texts. Thank God.”[3] She follows this statement up with a citation of Psalm 19:1-6.

After I finished reading the chapter, I posted to Twitter about it:

Not long after I posted, two gentlemen I follow on Twitter commented with some rather startling material. First, Jim Majors who jokingly suggested that Thomason must have an additional forum to her blog and book at which she’s written.

Second, Elisha Ben Abuya who took a screen shot of the site that Jim Majors had also found.

The 2013 post upon which Jim and Elisha independently stumbled can be viewed here. It is apparently run by a Christian named Otangelo Grasso who started that particular forum in 2009. As can be clearly seen, Thomason’s words and Grasso’s words are uncannily similar. Not only is their verbatim agreement, Grasso also follows up his statement with a citation from Psalm 19.

But this is not the only similarity the two share.

Thomason depends upon the work of Hugh Ross in ch. 2 and cites him at the end of the chapter. In ch. 3 of Ross’ The Creator and the Cosmos,[4] Ross lists the same three claims that Thomason does: the Bible makes claims about a “Transcendent Cosmic Beginning,” “Continual Cosmic Stretching,” and “Cosmic Cooling.” Under each of these claims, Ross mentions a number of texts that allegedly support his concordism.

What is interesting here and pertinent for our discussion is not that Ross abuses biblical texts to support his eisegesis. Rather, it is how Thomason has appropriated Ross’ lists for her volume. In each of the subsections in Ross’ volume, he rarely fully quotes any biblical text. Instead, he cites them as evidence for his claims, leaving it to the reader to crack open their Bible and look at the texts. But Thomason doesn’t do this; rather, she quotes at length a number of the biblical texts that Ross mentions. Moreover, she doesn’t quote all of the texts Ross mentions but only selects a few. The table below lists the texts Ross mentions and the texts Thomason mentions with those that overlap in bold font.

Apart from claim #3 which Grasso does not discuss, Grasso’s list of passages and Thomason’s list of passages are identical in not only their wording but also in their order, especially in the way Thomason’s ordering agrees with Grasso’s but disagrees with Ross’. This cannot be coincidental. Of the eighteen passages Ross either quoted or alluded to under claim #1, Thomason quotes eight, the only exception being John 1:1 (which we will address shortly). Of the twelve passages Ross mentions under claim #2, Thomason quotes four. Are we to believe that Thomason picked the exact same verses to quote as those mentioned in Grasso’s work despite the fact that Ross had mentioned numerous more? Why doesn’t Hebrews 11:3 appear in Thomason’s work? Or Jeremiah 10:12? Why are they exactly the same verses as a previous author not cited?

But there are even more reasons to think Thomason was borrowing from Grasso’s work. First, claim #2 in her book is entitled “A continuous, universal cosmic expansion.”[7] Ross’ wording is different: “Biblical Claims for Continual Cosmic Stretching.”[8] But what of Grasso? Well, his wording for claim #2 is this: “A continuous, universal cosmic expansion.” That is, Thomason’s wording and Grasso’s wording are identical.

Additionally, in the chart comparing Ross’ supporting texts and Thomason’s, there is but one text in Thomason’ that isn’t in bold: John 1:1. But this is only partially true. Ross mentions John 1:3, not John 1:1-2. Thomason, however, quotes from John 1:1-3 but only lists it as John 1:1. Who else does this? You guessed it! In Grasso’s list, he lists only John 1:1 but quotes John 1:1-3! This is an example of editorial fatigue: Thomason has unintentionally given away that she’s using Grasso as a source by making the same mistake he did. Similarly, whereas Ross mentions Colossians 1:15-17, both Thomason and Grasso only list Colossians 1:15-16.

No Honor Among Thieves

It is painfully obvious that Thomason has lifted from Grasso’s work without any proper citation. And the fact that she doubled down on this is unbecoming of one who has a PhD and teaches at the university level.

But this is not at all surprising for Thomason who has in the past demonstrated a predilection for being unscrupulous with her work. See the examples below.

This is pop-apologetics at work. It is so often second-hand, dealing not with academic literature but with fluff. But that Thomason felt the need to just steal fluff from another speaks volumes both about her character and the content of her apologetic.

Acknowledgments: I want to thank Jim Majors and Elisha Ben Abuya for locating the page that Thomason apparently plagiarized. I also want to thank Floridaline for keeping me up to date on Thomason’s doubling-down after she was alerted to it.

[4] Hugh Ross, The Creator and the Cosmos: How the Latest Scientific Discoveries Reveal God, third edition (electronic edition) (Colorado Springs, CO: NavPress, 2001), 19-27. It should be noted that Thomason is citing an edition from 2018.

7 Comments on “Caught in the Act: SJ Thomason Is At It Again”