Helen Bond: The “Social and Cultural Ramifications” of a Writing a Bios of Jesus 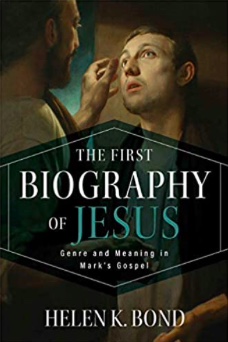 [I]t is useful to consider not simply the literary implications of writing a bios, but also its social and cultural ramifications. To write a biography of a philosopher or a religious figure was to immortalize his memory, to create a literary monument to his life and teaching. Rather than reducing Mark’s work to a “memory aid,” a depository of earlier tradition, or even a natural evolution from an earlier oral period, we should understand his actions as an attempt to produce an authoritative, written document. His work, we can assume, was both an attempt to keep alive the memory of a figure with whom he was personally intensely invested, and also a bid to legitimize a very specific view of that figure. Our author would have been aware that there were those who held different assessments of Jesus, both in the wider world and perhaps within other early Christian groups, but his work constructs what he sees as the “right” portrait, the account that for him best captures the life and significance of the figure at the heart of his faith. Moreover, by linking Jesus firmly to the story of Israel (through quoting prophetic texts), and by articulating a shared future hope (through Jesus’s eschatological sayings), Mark’s work aims to create a firm basis for Christian identity in the past, present, and future.

← Script for Amateur Exegesis – Season 2, Episode 4:”Turned to God from Idols”
Explaining Away the Plagues: Bibhistctxt Takes on ‘The Exodus Decoded’ →

One Comment on “Helen Bond: The “Social and Cultural Ramifications” of a Writing a Bios of Jesus”