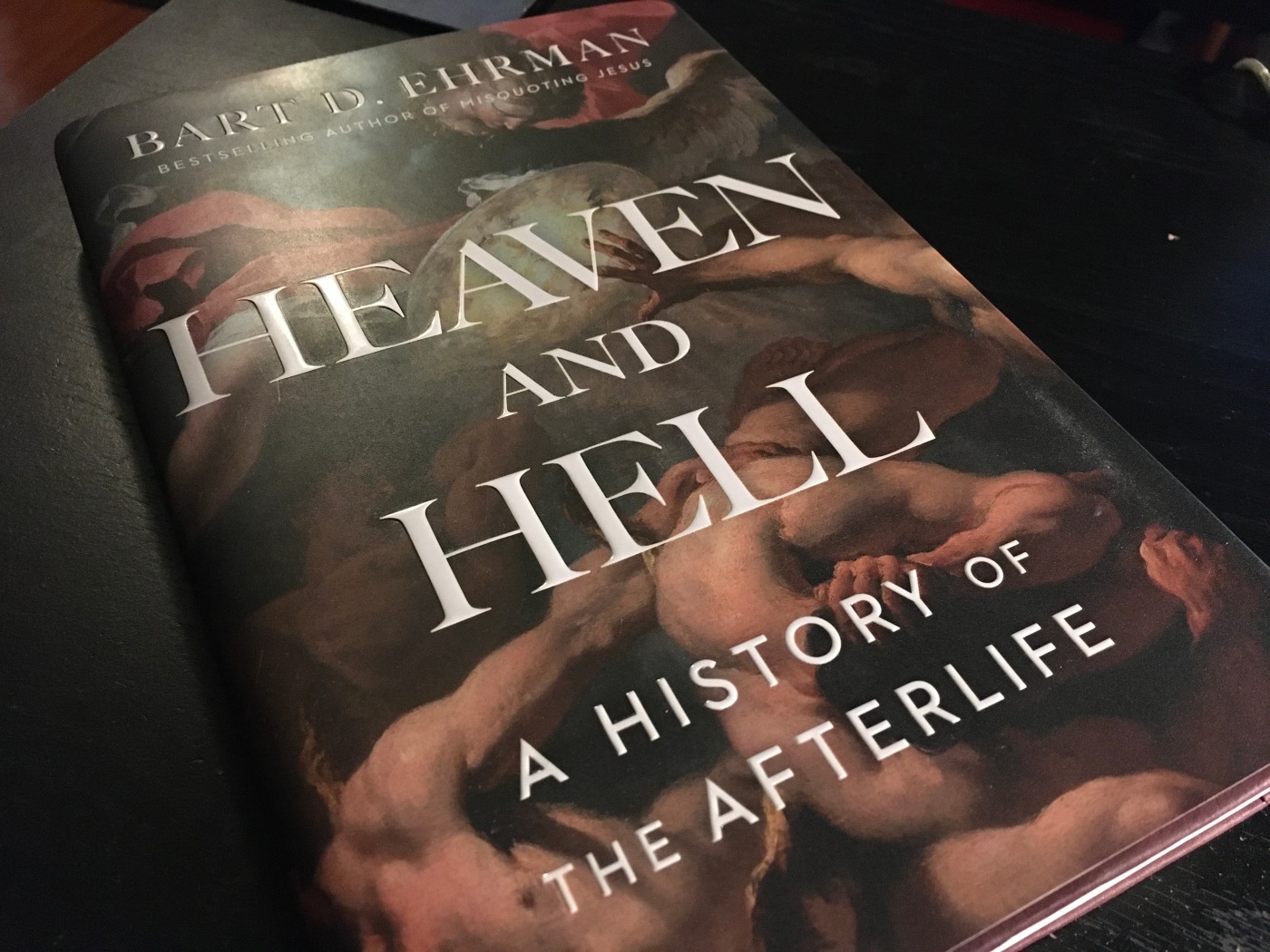 Readers of my blog have noticed that over the past couple of weeks I have been throwing up brief snippets from Bart Ehrman’s latest book Heaven and Hell: A History of the Afterlife (Simon & Schuster, 2020). I for one have enjoyed this volume by Ehrman and have learned quite a bit, mostly concerning Greco-Roman views of the afterlife. There are, of course, places where I find myself either disagreeing with Ehrman or wanting more explanation. At some point I will likely write a review of the book and perhaps I’ll express my concerns there. Some have already done this, including evangelical author Randy Alcorn who wrote a brief review of Heaven and Hell over at his blog Eternal Perspectives. The review, published back in April, is entitled “Heaven and Hell: Bart Ehrman’s Latest Attack on Christianity.” Ehrman himself came across it and asked Alcorn if he would be okay with it being published to ehrmanblog.org for his audience to read. Alcorn agreed and you can find the review as well as a brief preface from Ehrman over at the site.

There’s a lot that could be said about Alcorn’s review of Heaven and Hell, but it could all be summed up thusly: it lacks teeth. For example, Alcorn takes issue with Ehrman’s claims regarding resurrection and afterlife in the Old Testament.

Ehrman denies the Old Testament ever speaks of resurrection (never mind passages such as Daniel 12:2, which says, “Multitudes who sleep in the dust of the earth will awake: some to everlasting life, others to shame and everlasting contempt”).

Alcorn then refers to an endnote that appears in ch. 5 of Heaven and Hell. In context, Ehrman had quoted Job 14:11-12 in which Job explicitly denies that the dead will come back to life. He then comments, “For this great poet of the ancient Israelite tradition, life comes no more once a person is dead. There is no life after life. Only death after life” (p. 82). At the end of that last sentence is the first endnote of the chapter and it is to this that Alcorn refers in his own discussion. Here is the portion that Alcorn quotes in his review.

Some readers may wonder why I am not contrasting this view of Job with the famous passage of Job 19:25-26, made most famous by Handel’s “Messiah.” In the King James Version, the verses read: “For I know that my redeemer liveth, and that he shall stand at the latter day upon the earth. And though after my skin worms destroy this body, yet in my flesh shall I see God…” (p. 301n1)

Ehrman notes that this particular text is problematic:

The Hebrew text was jumbled over the course of its transmission, so that it is impossible to know how to translate the text or determine exactly what it means. That is to say, though it makes good sense in most English translations, the Hebrew is a mess. (p. 301n1)

He then cites the work of Alan Segal from his book Life After Death: A History of the Afterlife (Doubleday, 2004).

consulted 12 major translations by different teams of Hebrew scholars, some of whom certainly don’t hold to biblical inerrancy. Their translations contain only minor differences in word choice. All of them suggest Job is indeed speaking of seeing God in the afterlife and affirming that, in what seems clearly to refer to the resurrection, he too will stand with that Redeemer upon a redeemed (New) Earth.

But as unimpressed as he is with Ehrman’s work, Alcorn’s own reasoning is less than judicious.

Ehrman and the Book of Daniel

The text that Alcorn offers as evidence against Ehrman’s claim that doesn’t refer to resurrection is Daniel 12:2. If you’ve read the book of Daniel and came across this verse, you no doubt believed that resurrection is precisely to what the Danielic author was referring. And if you thought this, you would be correct. So why does Ehrman, an accomplished and highly trained scholar and historian, think that the Hebrew Bible never refers to resurrection? The answer: he doesn’t think that.

In ch. 6 of Heaven and Hell, Ehrman discusses various texts that speak of a resurrection from death that is not a national “resurrection” (he covers national “resurrection” in ch. 5). He writes, “The doctrine of the bodily resurrection of the dead at the end of time originated about two centuries before the life of Jesus, and by his day it had become a common feature of Jewish thought” (p. 104). He discusses a few texts that are either thought to feature bodily resurrection (e.g. Isaiah 53) or most assuredly do (e.g. 1 Enoch 6-36, i.e. the “Book of Watchers”). Before closing out the chapter, Ehrman comments on the book of Daniel and specifically touches on Daniel 12:1-3: “Daniel is the first and in fact only book of the entire Hebrew Bible to predict that a resurrection of the dead would come at the end of time” (p. 121). This isn’t a national resurrection about which Daniel speaks but rather “he maintains their actual bodies will come back to life” (p. 122, my emphasis).

This position on Daniel 12:1-3 isn’t something upon which Ehrman only recently arrived. In his textbook on the Bible, Ehrman discusses the connection between apocalypticism and resurrection. Noting how the rest of the Hebrew Bible lacks this apocalyptic view, he writes, “You do not get the idea of a resurrection before Daniel (see Daniel 12:1-3).”[1]It is clear that this has been Ehrman’s view for at least the last six years and given that it is the natural reading of the text, there is no reason to think it was ever not his view. Therefore, Alcorn has either misread Ehrman or is deliberately misleading his audience to score rhetorical points against him.

Ehrman and the Book of Job

Alcorn takes issue with Ehrman’s statement that the author of Job didn’t believe in any life after death. Ehrman had cited Job 14:11-12 but other Joban texts serve to demonstrate the point.

Based upon texts like these, many scholars find implausible the interpretation offered by Alcorn of 19:25-26. For example, evangelical biblical scholar John Hartley, citing the aforementioned Joban texts, writes, “Since Job finds no support for a belief in resurrection, the claim that resurrection is the focal point of the passage seems to be a reading back of the NT into the OT.”[2] Similarly, Samuel Balentine notes,

From a Christian perspective, it may indeed be tempting to interpret Job’s vindication “at the last” as an embryonic witness to resurrection. That this is Job’s belief, however, is unlikely for several reasons…. [I]t is important to bear in mind that ancient Israelites did not as a rule believe in life after death or the resurrection of the body…. Job himself states the representative view: “mortals lie down and do not rise again; until the heavens are no more, they will not awake or be roused out of their sleep” (14:12).[3]

Finally, David Clines in his commentary for the Word Biblical Commentary series observes,

Against any view of bodily resurrection it need only be noted that it contradicts everything the book has said previously about the finality of death (7:9; 10:21; 14:10, 12) and, in case it should be argued that this is some kind of new revelation of an existence beyond death, it needs to be noted that it is totally ignored in the remainder of the book (cf. 21:23-26; 30:23). Among the early fathers, Chrysostom already refuted the resurrectionist interpretation by quoting 14:12….[4]

It seems that on this subject, Ehrman is in generally good company as Hartley, Balentine, and Clines are all accomplished scholars and seem to be anything but atheists. If the best Alcorn has is his two-dimensional reading of an English text, devoid of any knowledge of scholarship, then we can dismiss his views out of hand.

Before I close, I wanted to touch on a rather odd criticism Alcorn makes of Ehrman’s book. He writes,

When researching my book Heaven, I read more than 150 books on the subject, including many I disagreed with. And, in reading Ehrman’s book, I saw no evidence that he had read a single evangelical book on heaven, though he did manage to cite one on hell (containing arguments for annihilationism and universalism). While his footnotes reflect extensive research in ancient Greek texts, he seems largely unaware of what the Bible or evangelical Christians claim about heaven – the new earth.

This strikes me as such a bizarre thing to say. Ehrman’s volume, as the subtitle indicates, is a history of the afterlife. As he notes in the preface, his focus in Heaven and Hell is upon “where these ideas came from within the dominant culture of the West, Christianity, especially as it emerged out of the pagan religious of its world and out of Judaism in particular” (p. xx). The book was never intended to trace every formulation of heaven and hell that has been proposed in Christianity’s two-thousand-year history. So, why would he cite any specifically evangelical work on the subject? Moreover, Ehrman’s book directly touches upon what the Bible says about heaven and hell. But because the Bible doesn’t speak univocally on the subject, neither does Ehrman when analyzing biblical texts. Alcorn, believing that the Bible speaks univocally, dismisses Ehrman’s views because of his a priori commitment to inerrancy and infallibility. Finally, if you’re going to trace the history of Greco-Roman views of the afterlife then you’re going to want to discuss the texts written by Greco-Roman authors. That’s just how history is done: you consult the primary sources. And where applicable, Ehrman cites the relevant scholarship on these various texts. That’s how scholarship is done.

A lot more could be said but this post is too long as it is. I thought it gracious of Ehrman to ask Alcorn’s permission to post the review on his own website despite its lackluster examination of the book. But it also reviews how often evangelicals tend to be in their analysis of these kinds of topics as well as their absolute hatred for all things Ehrman.

[2] John E. Hartley, The Book of Job, NICOT (Grand Rapids, MI: William B. Eerdmans Publishing Co., 1988), 296. Later Hartley states that, though vv. 25-26 do not “explicitly support the doctrine of resurrection,” the idea that gives rise to such a belief in the New Testament is present.

Job is working with the same logic of redemption that stands as the premise of the NT doctrine of the resurrection. Both hold to the dogma that God is just even though he permits unrequited injustices and the suffering of the innocent…. In this way Job’s confidence in God as his Redeemer amidst excruciating suffering stands as a model for all Christians. (p. 297)

In this way, Hartley does his best to honor the context and meaning of the Joban text and connect it to his evangelical faith in Jesus Christ. Though I am not compelled by such a reading and even find problems with it, I do find it commendable when Christians respect the Jewish scriptures as Jewish scriptures.