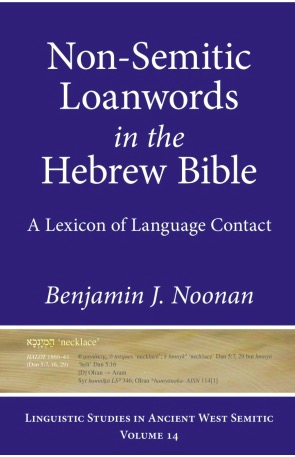 Over at ANE Today, Benjamin Noonan (PhD, Hebrew Union College) offers readers a preview of his book Non-Semitic Loanwords in the Hebrew Bible: A Lexicon of Language Contact (Eisenbrauns, 2019). Like most languages, classical Hebrew was a hodgepodge of linguistic sources, especially Semitic. Noonan’s work focuses on non-Semitic language influence on the Hebrew Bible, noting that Egyptian and old Iranian are two of the most common “donor” languages. He also observes that 96% of all loanwords in the Hebrew Bible are nouns, not verbs. Noonan concludes,

In sum, the Hebrew Bible’s loanwords represent a fascinating topic of study. Analysis of these loanwords’ origins and distribution sheds significant light on the Hebrew Bible and the world in which it was written. By doing so, we gain a better understanding of the linguistic and historical contact between the ancient Israelites and non-Semitic peoples such as the Egyptians, Hittites, and Persians.

How often we forget that the Hebrew Bible is rooted in the historical and cultural context in which it was written. Yes, in some aspects it is unique. But to truly understand and appreciate it, we must account for its origins as ancient Near Eastern literature. The presence of such loanwords, as Noonan points out, aids us in grasping the significance of the Bible’s origins.