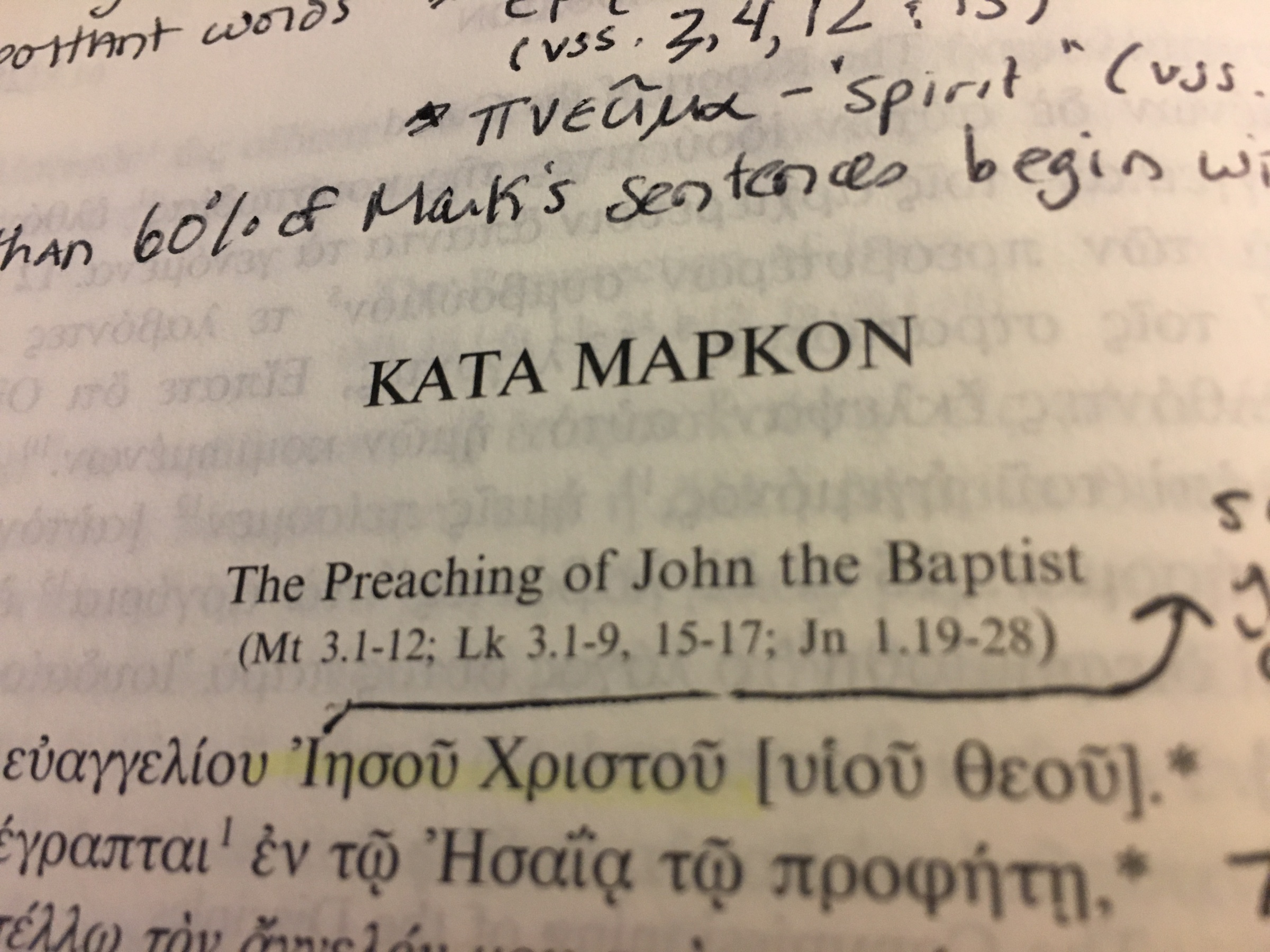 For previous posts in this series, please see the series’ index.

In this pericope which is part of a series of healing and exorcism narratives (i.e. 1:21-28, 1:29-34, 2:1-12) Jesus is met by a leper who begs him to heal him of his skin disease. Jesus, risking becoming unclean himself, touches the leper and suddenly the skin disease leaves the man. He then charges him to not say anything to anyone but to go to the priest to make an offering. Yet the man disobeys Jesus’ command and begins to tell everyone what has happeneding, forcing Jesus to remain in remote areas (i.e. “deserted places”; cf. 1:35).

40 There camea to him a leperb begging him [and kneeling]c and saying, “If you will it, you are able to make me clean.”  41 Moved with compassiond and having stretched out his hand, he touched him and said to him, “I will it. You are clean.” 42 And suddenly the leprosy left him and he was clean. 43 Strictly warning him,e he immediately sent him awayf 44 and said to him, “Be sureg to not say anything to anyone, but go show yourself to the priest and offer for your cleansing that which Moses commanded as evidence to them.”h 45 But having gone out he began to proclaim freely and spread the word, so that Jesusi was unable to go into a city, but remained in deserted places. And there came to him people from all over.

a Greek, erchetai. The use of the present tense here is similar to how in English we use indentation to indicate a new paragraph.

b Greek, lepros. The term used in the New Testament does not necessarily refer to leprosy as we understand it but rather is a generic term for one who had a skin disease, particularly one that would have made them ceremonially unclean and therefore unable to enter the temple (see Leviticus 13-14).

c Greek, kai gonypetōn. Both NA28 and UBS5 place kai gonypetōn in brackets to indicate that it appears in some ancient manuscripts like Codices א (Sinaiticus), L (Regius), and Θ (Koridethi) but does not appear in others including Codices B (Vaticanus), D (Bezae), and W (Washingtonianus). For more, see Bruce Metzger, A Textual Commentary on the Greek New Testament, second edition (UBS, 1994), 65.

d Greek, splanchnistheis. This is the reading of Codices א, A (Alexandrinus), B, and others. However, Codex D reads orgistheis, “he became angered.” This is a possible reading and one favored by some scholars including Bart Ehrman. See his essay “A Leper in the Hands of an Angry Jesus” in Amy M. Donaldson and Timothy B. Sailors (editors), New Testament Greek and Exegesis: Essays in Honor of Gerald F. Hawthorne (Eerdmans, 2003), 77-98. See also Robert Guelich, Mark 1-8:26, WBC vol. 34a (Thomas Nelson, 1989), 41.

e Greek, embrimēsamenos. This emotionally charged participle is omitted by both Matthew (Matthew 8:4) and Luke (Luke 5:14).

f Greek, exebalen. This is the same verb used throughout Mark to describe exorcism of those who had been possessed by demons. Here the sense is not as harsh as in those other places.

h Greek, eis martyrion autois. Robert Guelich renders the phrase “as evidence against them,” noting that “the normal function of [martyrion] with the dative [i.e. autois] to connote incriminating evidence against a defendant…strongly supports that rendering here” (Guelich, 77). But against whom? In context, Jesus has told to the healed man to go to “the priest” and not “the priests.” Perhaps it is a reference to the context of the Markan community in which there were charges that Jesus ignored entirely the Mosaic law. Or perhaps it is a reference to the community of which the leper was a part so that his offering for his cleansing is a witness against those who had treated him as an outsider. The text just isn’t clear enough to offer a definitive answer. My translation is intended to convey that the offering for his cleansing was proof that he was indeed clean, not as evidence against his opponents.